He was thinking that Icelanders are grateful to meet foreigners, who have heard of their country. And even more grateful to hear someone say, it deserves better. He was a twentieth-century Icelandic writer, influenced by modern currents in Germany and France.

Halldór Laxness was born in Reykjavik, but spent his youth in the countryside. From the age of seventeen, he lived abroad, chiefly on European continent. His spiritual experiences are reflected in books of an autobiographical nature. In 1927, he published “The Great Weaver from Kashmir”. In 1970, he published an ecological essay, “The War Against the Land”. In the 21st century, interest in Laxness increased in English-speaking countries, following the re-publishing of several of his novels. As he said: “Remember, any lie you are told, even deliberately, is often a more significant fact than a truth told in all sincerity.” 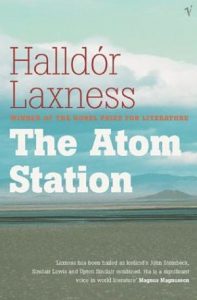 Narrated by a country girl from the north, The Atom Station follows her experiences, after she takes up employment as a maid in the house of the Member of Parliament. When the Americans make an offer to buy land in Iceland, to build a NATO airbase after the Second World War, a storm of protest is provoked throughout the country. Her experiences expose the bourgeois society of the south as rootless, and shallow and in stark contrast to the age-old culture of the solid and less fanciful north. https://www.amazon.co.uk/Atom-Station-Halldor-Laxness/dp/0099455153/ref=sr_1_1?ie=UTF8&qid=1488273622&sr=8-1&keywords=Halld%C3%B3r+Laxness