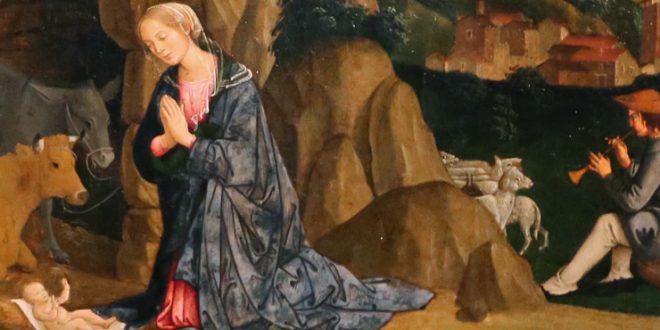 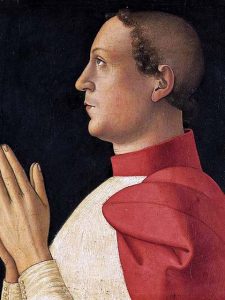 A journey from gothic styles to renaissance forms

We know little about his life, yet he was the greatest Roman painter of the Renaissance. His first work is the Madonna Del Latte, preserved in the Civic Museum of Rieti. He was a painter of the Roman school of the Renaissance. Born in Rome around 1430, Antoniazzo Romano https://www.finestresullarte.info/Puntate/2012/14-antoniazzo-romano.php painted the fresco in the Bessarione chapel in the Basilica of the Holy Apostles. His cycle of frescoes on the life of Santa Francesca Romana was made in 1468 in the monastery of the Oblate di Tor de’ Specchi. Due to the common tendency to cut out the Flemish profile and physiognomy that of Piero Della Francesca contributed to the evolution of his style. Looking at his paintings, starting from 1485, you can see the psychological consolidation of the characters. 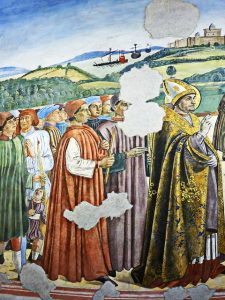 His ability was to grasp not only the physiognomies, but also the character and religious piety of his clients. He was able to observe the paintings of Melozzo da Forlì, Beato Angelico and Benozzo Gozzoli, Piero della Francesca, Domenico Ghirlandaio and Pietro Perugino. The first document concerning him dates back to 1452, a fine, imposed on him on February 14. He had many students and a thriving shop. In Dublin, one of his Madonna made for Pope Leo I is visible in the National Gallery. His triptych Madonna and Child (between Saints Peter and Paul and Count Onorato II Caetani), was made in 1476 for the cathedral of S. Pietro Apostolo, in Fondi. Around 1480, Antoniazzo Romano http://www.arte.it/artista/antoniazzo-romano-137 worked in the Sistine Chapel. 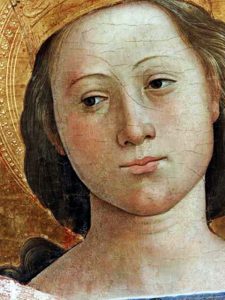 His expertise in portraying his donors is proverbial. The Triumph of Gentile Orsini is a fresco that Antoniazzo Romano https://www.santamariasopraminerva.it/it/cappella-antoniazzo-romano.html painted in the Castle of Bracciano. In Rome, however, observing the apse of the basilica of Santa Croce in Gerusalemme, you will find his cycle with the Stories of the invention of the true cross. The last of his dated work, the table with the Annunciation and Cardinal Torquemada, awaits you in the Roman basilica of Santa Maria sopra Minerva. Among its most important clients are Pope Sixtus IV and Onorato Caetani d’Aragona, Pietro Riario and the Orsini family. 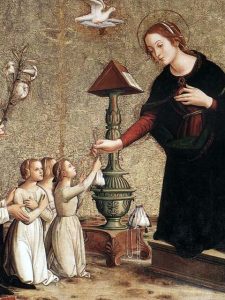 With the zimarra, the gold chain and the hat on his hands joined in prayer, the figure of one of his patrons (Count Onorato II Caetani d’Aragona) is in profile. He was one of the founders of the guild of painters and illuminators of Rome. Influenced by Benozzo Gozzoli and Beato Angelico, he created a Virgin and Child (his first work), in 1461. In the second part of the 15th century, Antoniazzo Romano https://www.silvanaeditoriale.it/libro/9788836627318 specialized in interpreting older images, generating new ones, with the background in gold. From 1512, his name disappears. Of him, there remains only a notarial deed for the division of his inheritance. 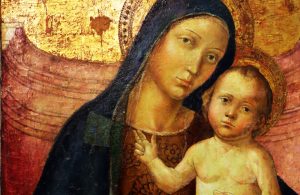 So that the memory of Antoniazzo Romano can accompany you for a long time, we recommend that you buy a good art book: Le due Rome del Quattrocento. Melozzo, Antoniazzo and the artistic culture of the 15th century in Rome, https://www.libroco.it/dl/aa.vv/Lithos-Editrice/9788886584210/Le-due-Rome-del-Quattrocento-Melozzo-Antoniazzo-e- Roman-400-artistic-culture / cw6567612487535.html.

Previous IN THE LAND WHERE TO SHAPE YOUR DESTINY – Six Indonesians who shaped the imagination
Next ROMAN STORNELLI, AMONG ECHOES, ILLUSIONS AND DESIRES – Roman holidays, between Trastevere flowers and bright stars