Breaking News
Home » Author Travels » WITH THE EYES OF BENOZZO – A virtual trip that can become real, through the lands where the Italian Renaissance was born 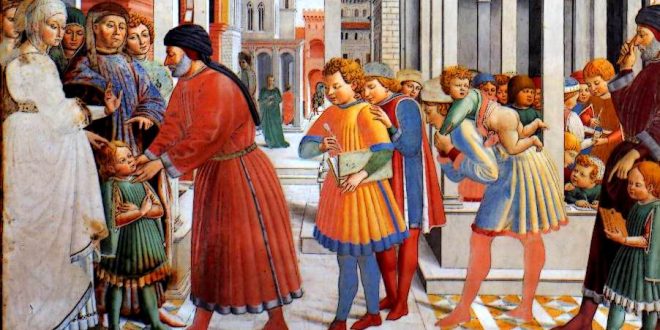 WITH THE EYES OF BENOZZO – A virtual trip that can become real, through the lands where the Italian Renaissance was born 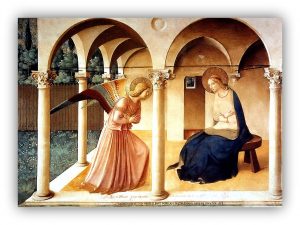 The year 1420 (MCDXX) was a leap year starting on Monday of the Julian calendar, but someone special was born. Benozzo Gozzoli was born in 1420, near Florence (the city where they worked Fra Angelico, Filippo Lippi and Paolo Uccello, Domenico Veneziano and Piero della Francesca), which is associated with the Guild of Painters. At age 18 he is in Florence, where he worked on the decoration of the church and convent of San Marco, completed in 1438 http://www.museobenozzogozzoli.it/works/FrescosPaintedCollaborationWithBeatoAngelicoBlessed.html 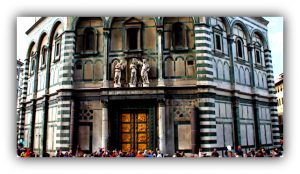 With Lorenzo and Vittorio Ghiberti, he worked for three years at Heaven’s Gate, in the city Baptistery http://www.museumsinflorence.com/musei/Baptistery_of_florence.html Benozzo Gozzoli is 27 years of age when that work will be completed in 1447. Begin the three-year collaboration with Fra Angelico (summoned to Rome by Pope Eugene IV), where Benozzo collaborated on the frescoes of St. Peter’s Chapel (finished in 1450, but now lost). 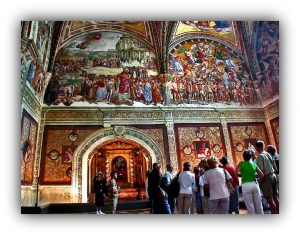 He completed in the cathedral of Orvieto the frescoes in the Chapel of San Brizio http://www.museomodo.it/en/cathedral_chapel_of_s_brizio.html In that distant 1449, he is 29 years old. In 1450 Benozzo moved to Umbria, where at age 30 he frescoed the monastery of San Fortunato in Montefalco, 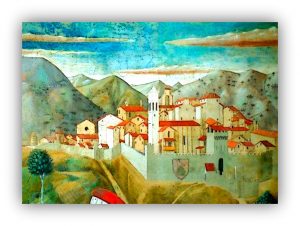 where he also works in the church of San Francesco (Chapel of St. Jerome), completing in 1452 the frescoes of the Stories of the life of Saint Francis http://www.museobenozzogozzoli.it/works/Montefalco.html 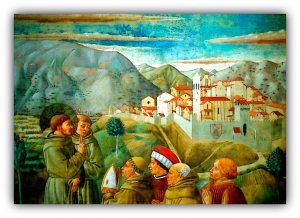 He is 32 years of age when he decided to go elsewhere. At age 33 Benozzo Gozzoli, in 1453 is in Viterbo where in the Church of the Poor Clares, realizes the series of paintings of the Santa Rosa Life, now lost. He is in Perugia in 1456, where he painted the Madonna of Humility with Saints (the New Wisdom Pala), for the College of St. Jerome 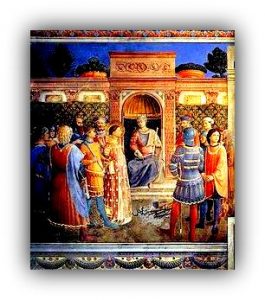 http://www.perugiacittamuseo.it/en/national-gallery-of-umbria.html He has completed 36 years of age, but still can not imagine that an important turning point in his career is coming. Comes the 1458, the year of the glitzy ceremony for the appointment of Pope Pius II, where the thirty-eight Benozzo Gozzoli is convened to prepare banners and flags. From 1459 to 1463 he works in Florence, where at the age of 39 years comes the most significant moment of his artistic activities. Commissioned by Cosimo de Medici, in 1459 he began the decoration of the chapel in Palazzo Medici, giving to his clients (and us all) its wonderful fresco: the Journey of the Magi 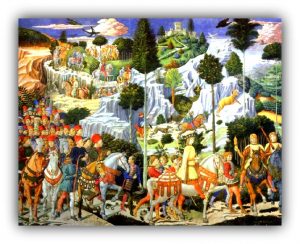 http://www.museumsinflorence.com/musei/chapel_of_the_magi.html Became famous, in 1460 the forty Benozzo Gozzoli marries Magdalena (daughter of a textile merchant). In Florence, he was commissioned in the year 1461 the Altarpiece of the Purification https://www.nationalgallery.org.uk/paintings/benozzo-gozzoli-the-virgin-and-child-enthroned-among-angels-and-saints 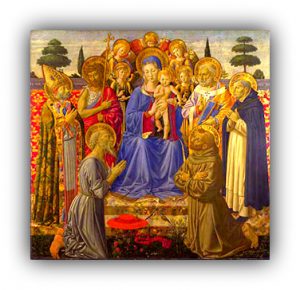 In 1467 Benozzo is in San Gimignano, where into the church of Sant’Agostino he frescoed the cycle of the Holy Life http://www.sangimignano.com/en/art-and-culture/churches/church-santo-agostino.asp 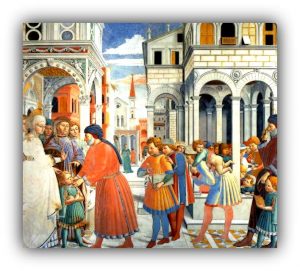 At age 47 he decided to open his own workshop of art, but in a larger city and commercially more dynamic. From 1468 to 1494, Benozzo has his workshop in Pisa, where he began the frescoes in the Camposanto (completed in 1484). The cycle of paintings with scenes from the Old Testament, all that remains today only something http://www.opapisa.it/en/square-of-miracles/camposanto/ At the age of 55 years, for political reasons, he was forced to abandon Pisa, conquered by the French. In 1495 Benozzo it back to Florence, then moved to Pistoia (where into Ghibelline Room of the Town Hall leaving his last work, The Sinopia for Majesty), dying of plague at the age of 57 years, 4 October 1497. Through oceans of water, time and air, Benozzo Gozzoli remained with us forever. http://www.museobenozzogozzoli.it/map/emap.html

Previous ROMAN LANDSCAPES – Stunning views of the city and poignant images of the Roman countryside
Next THE MAN CALLED BENOZZO – Trained as a goldsmith, he will become painter