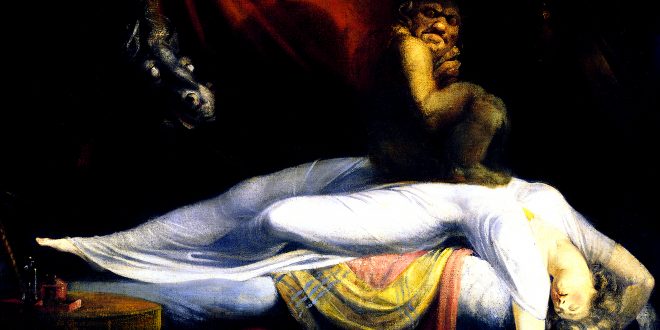 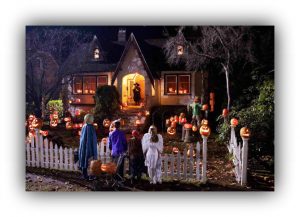 Everyone loves to travel, but not everyone likes to do it the same way. What you can do is have the time, within your life. Meeting Benches. The way to make the world better is easy. info@meetingbenches.com to share emotions, observing new creative horizons. Try to make a special trip to the discovery of several famous paintings that show the terror and anguish of the human being. Murderers and ghosts, blood and mystery, sometimes can be hidden inside a painting, because art is full of disturbing subjects representations that show the dark side of the human mind. On days when celebrating Halloween Celtic New Year, give yourself your own special artistic darkness, entering into three famous museums, looking for three shades of fear. 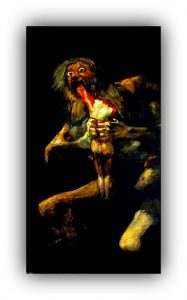 You’ll have to go to Spain to learn about your first hint of fear, because it is in the Museo del Prado in Madrid. https://www.museodelprado.es/en/ That fear is enclosed in considerable size (146 × 83 cm), and has been realized with the technique of oil painting on plaster. Eerie and dramatic, the pictorial creation of Francisco de Goya (built between 1819 and 1823 during the most critical phase of its depression), is the myth of Saturn (or Cronus, god of time), that feeds their children, to prevent they take him away from the throne. Observing this incredible painting, full of anguish and anxiety, you will find that the Spanish painter has succeeded in giving harsh tones to Saturn / Kronos. Leaving the Prado Museum, maybe you even try to give an interpretation to your concern, noting the existence of the fear of time (devourer of all things), the horror that even approaches you from youth to old age, or generic condition alienating the human condition of our times. 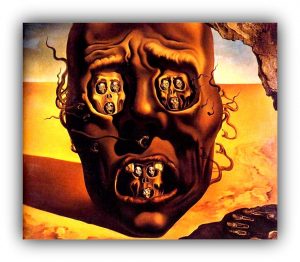 The second shade of fear, to accompany your Celtic New Year, is in a painting which is exhibited at the Museum Boijmans Van Beuningen in Rotterdam. The face of war, by Salvador Dali. http://www.boijmans.nl/en/#wClZycLPfv7fXcJR.97 That desert landscape with worms (along with the colors of the earth, and to the mask with the skulls), was created in 1940, but since then has never ceased to tell what the painter had wanted to do with the colors: the anguish and the man’s restlessness, generated by the war. This small oil on canvas (64 x 79 cm), was born in the United States. It had just started the Second World War, but the work is linked to the Spanish Civil War (ended in the previous year). This painter is not interested in politics, he was against the war in general, so this is not a picture of denunciation, but the visible manifestation of a deep fear. 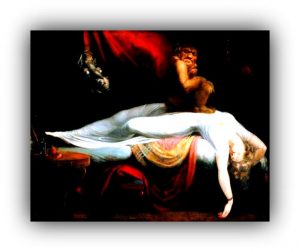 The Nightmare. On the left of the picture, the face of a horse emerges from a tent. It is facing you, the monster that appears above the body of a young woman asleep (or maybe dead). Right before your eyes (and certainly in all your perceptual system), there is the nightmare of Henry Fuseli, a canvas that he painted in 1781. You’ll have to go to the United States to give you this third tinge of fear because that painting is preserved in the Detroit Institute of Art. http://www.dia.org/art/ You can not hide your anxiety, even outside the museum, because disturbing presences and chiaroscuro tones (used for the dreamlike visions), still continue for a little time to recall to your mind demons of mythology Germanic, those who subjugate those who dare to sleep alone.

Previous HALLOWEEN’S TIME
Next ITALIAN PILGRIMAGE – Passing near Ortona, you can distract yourself for free at the fountain, with good local red wine