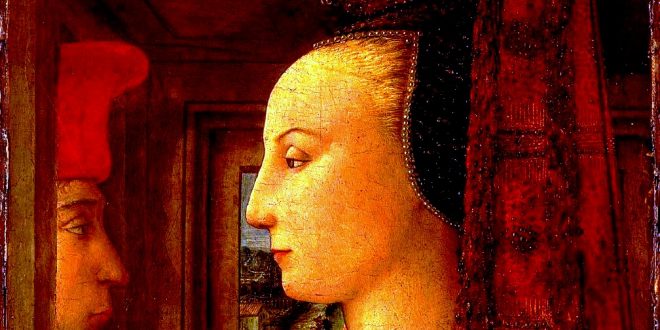 AT A CASEMENT – Metropolitan Museum of Art, New York City / Portrait of a Man and Woman 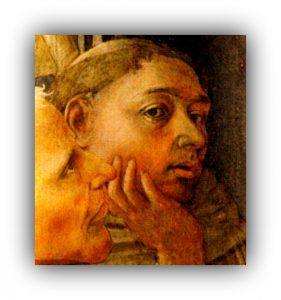 In 1420, he was admitted to the Carmelite Friars community (Priory of Our Lady of Mount Carmel in Florence), after his parents had died. The little treasure – Portrait of a Man and Woman at a Casement – was born ca. 1440. With a view onto a landscape, this is the earliest surviving double portrait in Italy. The little painting that you can admire at the MET http://www.metmuseum.org/ (tempera on wood, 64.1 x 41.9 cm) have a father named Fra’ Filippo Lippi (aka Lippo Lippi), a Florentine artist, he was supported by the Medici family, and his paintings became popular. 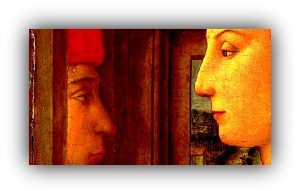 In 1458, he set about painting a picture for the monastery chapel of St. Margherita, where he met a novice of the Order, Lucrezia Buti. He asked that she might be permitted to sit for the figure of the Madonna, but it was a pretext. He abducted her to his own house, engaging in sexual relations with her. The Pope granted Lippi a dispensation to marry Lucrezia, but before the permission arrived, he had been poisoned. What happened? They had a son (Filippino Lippi), who became a painter. As you can see, the woman of this painting she are dressed at french style, and she is observed by a man, appearing at a window. 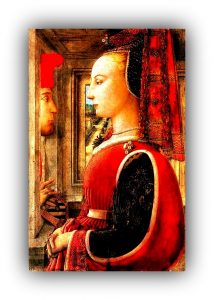 If you prefer – and you can choose what you want – the two figures may be Lorenzo di Ranieri Scolari and Angiola di Bernardo Sapiti (who were married about 1439). https://www.khanacademy.org/humanities/renaissance-reformation/early-renaissance1/painting-in-florence/v/fra-fillippo-lippi-portrait-of-a-man-and-woman-at-a-casement-c-1440 Yes, maybe, instead of studying, he spent all his time scrolling pictures on his own books and those of others, buthis career – without fundamental variation in style or in coloring – was one of continual  development. Visiting central Italy, do not forget to go to Spoleto, because Lippi is buried on the right side of the transept Within the Spoleto Cathedral.

Previous THE BURGEON OF BURTON’S BURDEN
Next FEDERICO FARUFFINI (1831/1869), ITALIAN PAINTER– Between Pictorialism and Scapigliatura