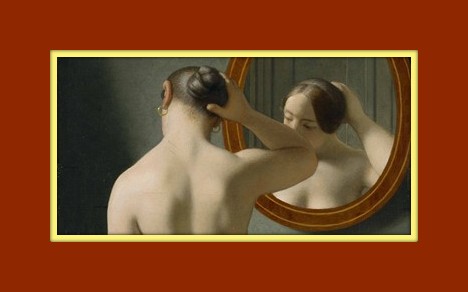 Anna Ancher / The maid in the kitchen 1883 – The treatment of light creates a wonderful play between indoors and outdoors, a graduation from the shaded cool of the interior to the warm sunlight beyond the yellow curtain. 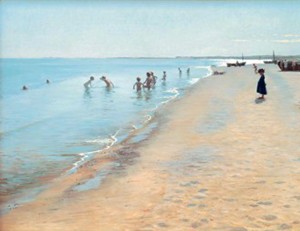 P.S. Krøyer / Summer day at the South Beach of Skagen 1884 – The appearance of grains of sand in the pigments demonstrate that Krøyer took open-air painting to the last degree, working with a large canvas on the beach directly in front of his subject matter. C.W.

Eckersberg / Portrait of Mrs Frederikke Christiane Schmidt 1818 – Copenhagen’s bourgeoisie need to demonstrate its newly acquired social position, showing that they were in possession of culture and artistic taste. Also with a painting. A good example of what Eckersberg was already able to achieve as a portraitist only a couple of years after returning home from six years spent in Paris and Rome.

J.Th. Lundbye / Autum landscape, Hankehøj near Vallekilde 1847 – Here, past and present met at the foot of the mound where the herdsman tends to his cattle: “quite clear, cold air, over which float a great many isolated small clouds”.

Christen Købke / Portrait of the landscape painter Frederik Sødring 1832 – The picture was signed on Købke’s 22nd birthday, 26 May 1832. The picture’s immediate, luminous freshness and delicate, restrained colour scheme has made it one of the most important works of Danish Golden Age painting. 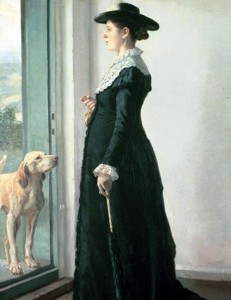 Michael Ancher / Portrait of my wife, Anna Ancher 1884 – The artist has raised a monument to his happy marriage to Anna Ancher by portraying her during her pregnancy. The family dog is also included, serving as the traditional symbol of loyalty. 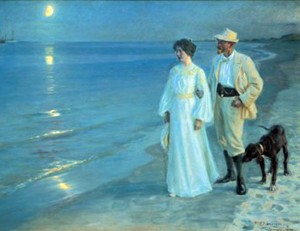 P.S. Krøyer / Summer evening on the beach at Skagen, the painter and his wife 1899 – “I am also thinking about painting a large portrait of my wife and myself together – but for that I must absolutely have fine weather”. Krøyer has her by the arm, but his figure seems to lack the strength to hold her.

Ejnar Nielsen / The blind girl 1896 – In the small Jutland town of Gjern, he painted the young girl depicted in The Blind. There is an intense alertness in the girl’s listening stance, and she holds the dandelion head with great care. 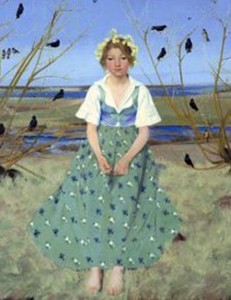 Harald Slott-Møller / Spring 1896 – The painting has an interesting interplay between the many naturalistic details and the ornamental quality of the picture as a whole. In Spring, the key concepts of germination and growth are symbolised by the young girl’s oblivious world in which pure innocence is still intact.