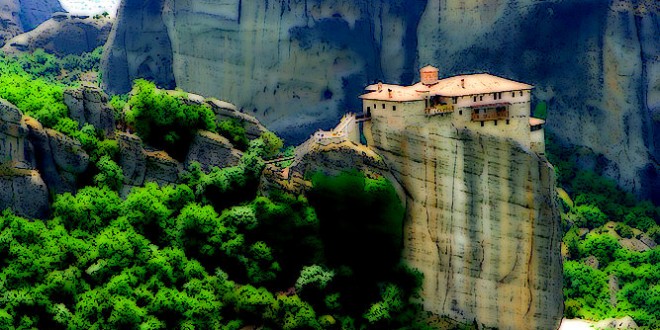 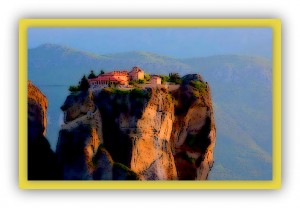 At one time, there were 24 peak-top monasteries in the region of Meteora in central Greece. Built on sandstone megaliths that rise up to 1,800 feet from the valley floor, strange but breathtaking landscape that has been sculpted by wind and water over thousands of years. Me and Franco came to see Meteora with my two girls (12 and 9) and 1 year old son. You can ask why I did not choose another – let’s say – more comfortable place for visit with children, especially with a baby, but … I am confident we are on right place. 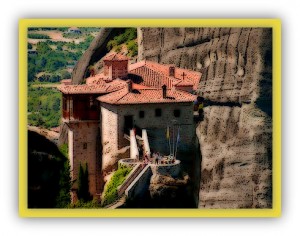 Meteora Monasteries grew out of the need to avoid Turkish persecution during the occupation in the 14th century. Monks had inhabited caves in Meteora since the 11th century. During the Turkish occupation it was the monasteries which kept alive the Hellenic culture and traditions, attracted not only the deeply religious, but the philosophers, poets, painters and the deep thinkers of Greece. The six magnificent monasteries still exist perched atop 1,300 feet high sandstone pinnacles. Now they are accessible by series of paths, earlier monks and pilgrims had to rely on rope ladders and baskets raised by winches to reach the top. We two love heights and especially „mental“ ones and Meteora literally means “middle of the sky” or place “suspended in the air”, full of wisdom, art and colours. 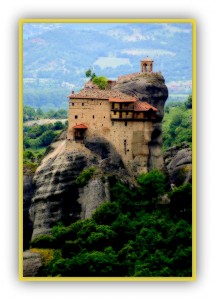 Awesome, I chose to come here in spring as I don’t like the idea of queues and lots of tourist in the summer, plus the heat. Girls were impressed by the monasteries perched up high on incredible peaks. The road to drive around the monasteries was incredibly good by Greek standards. Pretty wide, with barriers! That was shocking after driving near many cliffs in Greece with no railings at all. It costs 2-3 € per adult to enter each monastery. In our case we like to take it slow and did our own adventure. We went into two of them. The walk to see the one from film “For Your Eyes Only” (James Bond series) was pretty intense, but the kids loved that we went through rock tunnels and appeared to be hanging in the air. That is the Holy Trinity monastery. Our little son slept sweet in baby bacpack on shoulders of Franco. You can’t take buggy or strollers because its all steps. We are amazed. Splendid views for excellent shots. The monastries are so calm and serene. It’s like getting rejuvinated and forgetting life on earth for a while. 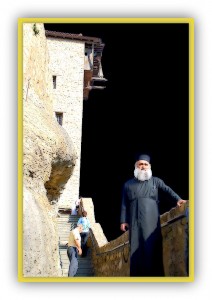 Visiting the Meteora Monasteries: The two closest towns to Meteora are Kalambaka(Kalampaka) and Kastraki and these are where most people stay. The village of Kastraki is closer to the monasteries and convenient for those who want to visit them by foot, but there are more options for food and lodging in Kalampaka. The village of Kastraki in the shade of the rocks of Meteora is a popular destination for the rock climbers who can walk out the door of their hotel and be climbing in a few minutes. We chose Hotel Doupiani House – http://www.doupianihouse.gr/ – by reviews and we were happy about the choice. Great value for money. Very friendly and accommodating staff. The property is decorated in style, clean, quiet. Greek breakfast is from locally sourced ingredients. But driving the surroundings we also foud this place we liked: San Giorgio Villa – small budget accommodation property, located on the road to the holy rocks in Kastraki village. http://sangiorgiovilla.com/. 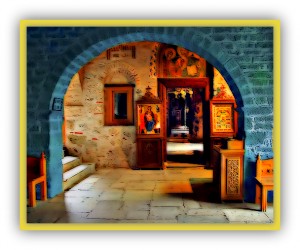 Best Times to Go: The Monasteries of Meteora may be visited year round but the weather is wet and cool from December to March. Crowds and high season rates are guaranteed from July 1st to October 15th. May and June are the best months for comfortable weather, low season rates and the opportunity to leisurely explore the area. Getting There: Buses to Kalampaka are available from Ioannina, Trikala, Thessaloniki and Athens. It is also possible to take the train from Thessaloniki or Athens with a switch at Larissa. If you are traveling from Athens, take a morning train so that you can enjoy the spectacular scenery as you pass through the mountains between Livadia and Lamia. You can hire a taxi to take you to the monasteries; some drivers can even act as guides. Clothing/Gear: Appropriate clothing is required to visit the monasteries. Sleeveless clothing and shorts are prohibited. Skirts and shawls are available at the entrance for those who are deemed to be unacceptably dressed (including guys wearing shorts and tanktops). 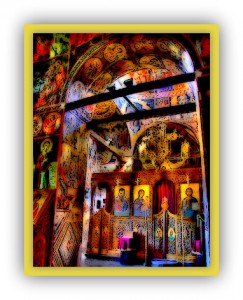 •          Remember to carry bottled water, especially if you are visiting the monasteries by foot. There are refreshment vendors along the road by the monasteries but their prices are excessive.

•          Be aware that every monastery that is open closes at lunch time, 1-3pm. The telephone numbers and working hours of monasteries can be found here: http://www.kalampaka.com/en/meteora/monasteries.asp

•          Plan to spend a full day at Meteora. You will delight in the play of light on the rocks and their changing moods. At night time, the rocks are dramatically illuminated by spotlights while autumnal mists shroud them in an ethereal mysteriousness. To see all the monasteries, you’ll have traveled over 20km. 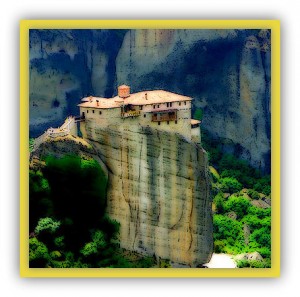 We asked our new friend Lazarus, where we should have dinner. “Go to Taberna Panellinio, it‘s the only good place“, he said. Franco (Italian) is a fanatic for detecting ingredients and he evaluate their cousine with words: „They are professionals, smart and pleasant. The flavor is direct, intense – exactly where you want it to be.“ Tzatziki was perfect, but even more perfect was melitzanosalata (creamed eggplant). Our daughters had a double order.  I ordered a chicken fillet with cheese, green pepper and onions, which was also really tasty. The oven baked potatoes that came with the chicken (Tata’s order) where out of this world, with a light lemon gravy that made you feel like you were rising high above the cloud to reach Meteora’s level. They brought us some sliced fruit with honey for an unexpected dessert and icecream for children. The restaurant is situated in a lovely position next to a fountain and is very relaxing. We liked this trip very much. Put this deffinitelly on your list. Nela and Franco. http://www.visitgreece.gr/

Previous ANTONIO ALLEGRI / CORREGGIO (1489/1534), ITALIAN RENAISSANCE PAINTER: The sweetness of expression of the characters and spells perspective
Next TRIP TO SCANDINAVIA – Upgrade to the eighth stage