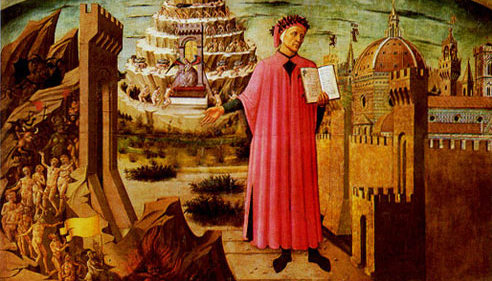 JOURNEY IN HELL: “She begins Dante’s Alighieri, of Florence, Divine Comedy, in which he deals with the penalties and punishments, of defects and merits, rewards and virtues. It begins with the first canticle of the first, the part which is called Hell, in which the author makes introduction to the entire work.” In the middle of the journey of our life,
I found myself within a forest dark,
for the straightforward pathway had been lost.
Ah, what to say, what a thing it is hard,
this forest savage, rough, and stern,
in the thought that it renews my fear!
This is so bitter that death is hardly more;
but to treat of the good that I found it,
I will say of the other things I’ve seen there.

I cannot well say as I entered,
I was so sleepy at that point
that I abandoned the true way.
But when I was at the foot of a hill arrived,
where the valley terminated
I had compunctious my heart with fear,
I looked up and saw his shoulders
vested already with the rays of the planet
that the other it leads right by every street.

Then was the fear a little quiet,

in the heart of the lake that it had lasted me
I spent the night with such pity.
And as one who, with distressful breath,
escaped from sea to shore,
he turns to the water perilous and gazes;
so I did my soul, that still was fleeing,
it turned back to gaze the step
that left no living person ever. 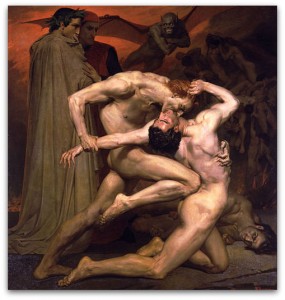